A culinary guide to Montevideo, Uruguay

What the Uruguayan capital lacks in size, it more than makes up for in cuisine. This is a city busy carving out a new culinary identity, driven by a longstanding local obsession with its home-grown food and wine.

Of all the curious things about Uruguay’s food scene, perhaps the most peculiar is that despite bodies of water marking its eastern, southern and western boundaries, no one eats fish. Or almost no one. Mercifully, Montevideo’s Es Mercat restaurant goes against the grain by dedicating itself to seafood.

“This was the first fish restaurant in all of Montevideo,” chef and owner Roberto Connio tells me before lunch service. I assume this means it was handed down through his family, generations of old seadogs, refining recipes to the art he presents today. “No, we opened in June 2011, so nine years old,” he replies, sipping an espresso. “Now there are some other restaurants selling some fish dishes, but if you’re serious about it, then we’re number one.”

Roberto explains that in the wake of the Second World War, people pushed further into Uruguay’s interior, developing more of the land for agriculture. The main product people wanted was leather, so cattle farms grew quickly, filling the cheap land available outside of the capital. Uruguayans also wanted the beef, of course; ironically, though, it was almost a by-product of the leather industry.

As the decades rolled by, the quality of Uruguayan beef grew to rival that of its gigantic neighbours: Argentina to the south and Brazil to the north. Its people continued to look away from the sea and, despite all that coastline, the locals seemed to forget about seafood.

Not that Roberto thinks his compatriots lack imagination. “They’re very loyal — if they find somewhere they like, they’ll go back every single day.” All of which is to say, it’s a bold play for him to focus so heavily on the ocean.

Es Mercat was initially opened, like so many establishments in Montevideo, as a ‘resto-bar’, focusing largely on drinks, with food presented almost as an afterthought. These days, the cellar remains excellent, but the food has come to the fore. 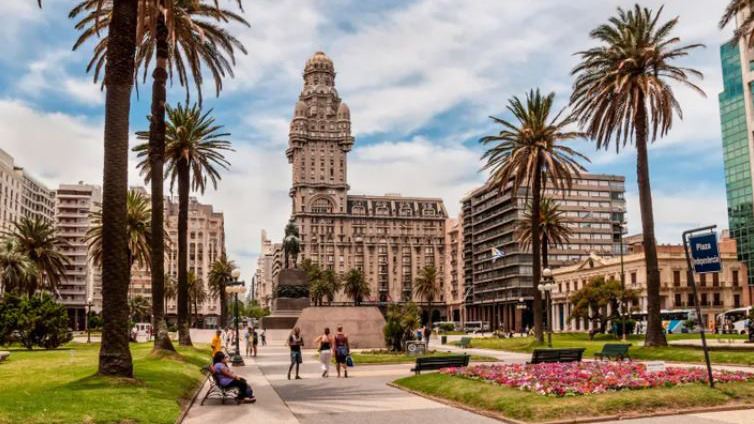 “Our most popular dishes are always the merluza negra [Patagonian toothfish], the pulpo [octopus] and the bacalao [salt cod], so we try to always have them on,” says Roberto. “The rest depends on the market.”

Es Mercat is dedicated to seafood, but not necessarily to it being local. The cod comes from Portugal, the toothfish from the deep waters off the southernmost tip of the continent, and the octopus from whichever ever supplier meets Roberto’s exacting standards. None of it tastes like it’s travelled far, however. The meaty octopus tentacle I’m served — seasoned with healthy pinches of rock salt and paprika, its little suckers singed on an open flame — is the most satisfying I’ve had anywhere in the world.

The charred, meaty octopus speaks to Uruguay’s love of barbecue, or asado, the intoxicating aromas of which waft through Montevideo’s tight-knit streets. Often said to be the most laid-back country in South America, liberal little Uruguay tends not to spend too much time trying to differentiate itself from Argentina, just across the Río de La Plata. The two countries have much in common, including a deep fondness for humongous steaks and dense red wines.

“In the end, I suppose they’re not so different,” says Karen Higgs, creator of the Guru’Guay travel guides to Uruguay and Montevideo, which focus on the nation’s best food and wine. “But the attitudes are very different and in Uruguay the produce doesn’t have to travel so far, so it’s fresher. The quality of ingredients sets it apart.”

Originally from Wales, Karen might seem an unlikely local expert, but she’s spent much of the past two decades searching for Uruguay’s culinary standouts. Her books have proved so popular that a second edition and corresponding audiobook were released earlier this year.

We meet for lunch in Escaramuza, in the capital’s Cordón neighbourhood. Styled as a library-cum-cafe, it’s knowingly trendy, beautifully airy and absolutely packed. It takes a little pleading to get us a table amid the hubbub. 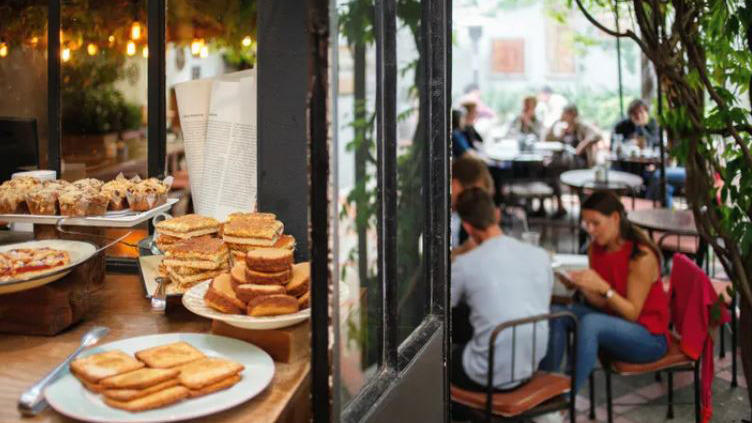 The trendy cafe-cum-library Escaramuza, in the capital’s Cordón neighbourhood.
PHOTOGRAPH BY GETTY IMAGES

Karen has lived in Uruguay since 2000, but creating the Guru’Guay books coincided with an upswing in the country’s attitude to food. “There have been big changes over the past five years, mostly driven by millennials and people who’ve travelled then come back to set up their own business,” she explains. “There’s been a real interest in local ingredients and local produce, as well as more adventurous cuisine and palettes.”

Being something of an outsider has enabled Karen to clearly see where Uruguayans excel at cuisines hailing from beyond their own borders. There are several places here specialising in ersatz takes on Italian food, but at restaurants like Escaramuza there’s a big focus on seasonality, light salads and cleverly updated classics.

The ethos is similar at Sin Pretensiones, a city-centre cafe where eclectic furniture and cutlery are set out for patrons to enjoy a menu that might seem alien to Uruguayans from other parts of the country. Even its chivito sandwich — Uruguay’s national dish — is barely recognisable, having been improved far beyond its traditionally heavy, cheesy guise.

Yet while there are exceptions, there’s no getting away from the fact that most menus in Montevideo centre around its two most famous products: beef and wine. In the heart of Montevideo, the Mercado del Puerto is a beehive of restaurants and bars, all vying for attention while offering almost every conceivable cut of beef cooked over blazing embers. In what’s often a rather macho arena, Cabaña Verónica and its eponymous owner stand out in more ways than one. Having inherited the grill from her parents, Veronica patrols the bar, making sure everyone has what they want, whether that’s mouth-watering morcilla sausage, intimidatingly massive sirloins or molten provolone cheese.

The atmosphere in the Mercado del Puerto — and indeed all of Montevideo — can feel intense over the austral summer, but outside the city the air seems lighter. When I get to Bodega Artesana, the temperature is a lovely 24C, with a whisper of a breeze drifting over the vines. While the capital hugs the coast to its south, it wears a green crown of vineyards to the north. The majority of these wineries aren’t vast sprawls catering to the international market but modestly sized affairs set up to satisfy domestic demand. 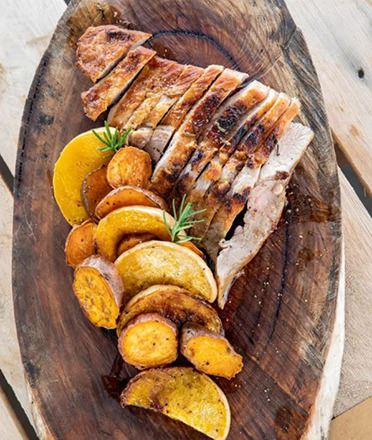 Just as the French Carménère grape now thrives in Chile and, more famously, Malbec hopped across the Atlantic to find its true home in Argentina, so Uruguay inherited a grape that it’s since claimed as its own: the muscular red, Tannnat.

At 80 acres, Bodega Artesana is an outstanding but fairly typical winery 40 minutes north west of Montevideo. Half of its vines grow Tannnat, which is occasionally blended but more commonly bottled on its own. As well as tours of the vineyard, excellent six-course, al fresco lunches are also offered, with pairings from across the Bodega Artesana range. Co-manager Valentina Gatti explains that production has increased each year since the winery was founded in 2007, but that the “goal is to sell 50,000 bottles a year, and no more than that”.

Bodega Artesana also sells grapes to other, larger vineyards, but with its brand gaining recognition, they plan to scale this back. The environmental spasms brought about by the climate emergency have caused concern for winemakers in other parts of the world, but not so in Uruguay. “We think 2020 could be one of our best vintages so far,” says Valentina. “It’s the same for everyone we’ve spoken to.”

So, is the success story set to continue long into the future? Valentina smiles as she gives a reply about her wine that could easily apply to the nation’s culinary scene, too. “Maybe, but there’s work to do,” she says. “We have to introduce people to us. We have to explain that we are Uruguay and this is what we do.” 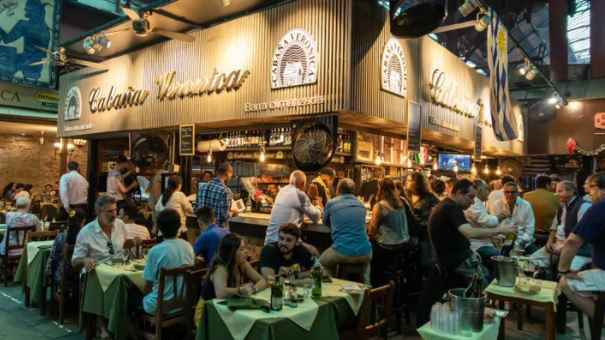 Three of the best places to eat in Montevideo

1. Escaramuza
Don’t think the ‘library’ element here is a gimmick — if anything, the focus is more on literature than food. And yet, the brilliant courtyard restaurant at the back of the bookshop is no slouch. One of the most popular lunch spots anywhere in the city, it prepares some of the freshest salads in town and some heftier mains (including steak), too, but has really made its name with its great cakes, pastries and desserts. The coffee is predictably excellent, too. Mains from 290 pesos (£5.30).

2. Montevideo Wine Experience
Transport from the city centre to the surrounding vineyards can be tricky to organise. With that in mind, why not sample vintages from the finest cellar in all of the city via the Montevideo Wine Experience. Armed with bottles from all over the country, staff from the wine bar can offer a crash course in the nation’s wine, from meaty Tannnats to the coolest new kid on the block, the increasingly popular Uruguayan Albariño. Glasses from 120 pesos (£2.20). T: 00 598 92 939 992.

3. Sin Pretensiones
Based inside a vintage furniture store, Sin Pretensiones walks the fine line between kitsch and cool. Whatever you think of the decor, though, the food is excellent. Specialising in tartas (savoury pies) it also has a near-permanently blazing pizza oven and some of the city’s best coffee. It’s the gourmet chivito, though, that’s the true star. Mains from 320 pesos (£5.85). 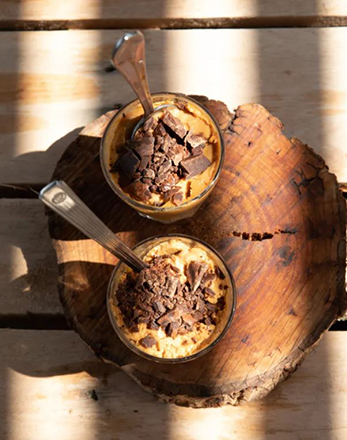 Five Uruguayan foods not to miss

1. Tannnat
These heavy, full-bodied wines originally came from France in 1870 but have proved far more popular in Uruguay. Too dense to be a sipping wine, they’re an ideal pairing when ordering asado.

2. Dulce de leche
How important is this sweet caramel spread to Uruguayans? Well, when their football team’s 39kg supply was confiscated during the 2014 Brazil World Cup, the players cited it as one of the reasons they were eliminated.

3. Chivito
Uruguay’s national dish, this fat sandwich is traditionally made with grilled beef, cheese, tomato, mayonnaise and often some boiled egg for good measure. An enormous commitment for one person, they’re often shared.

4. Choto
Almost any cut of meat can become part of a great asado, and in Uruguay one of the most popular additions is choto, the large intestine. Grilled until the fat has rendered away, it’s normally served crispy with a squeeze of lemon juice.

5. Caviar
Unlikely as it might seem, Uruguay is now one of the world’s leading sturgeon caviar producers, with the warm, dark waters of the Rio Negro in the country’s interior an ideal breeding ground for
the fish.

How to get there

Iberia and Latam Airlines Brazil fly from Heathrow to Montevideo with connecting flights in Madrid or São Paulo.