In Midst of Covid Chaos, One Latin American Nation Gets It Right

Uruguay has become an oasis in the middle of a Covid-19 storm.

Despite sharing a border with Brazil, a coronavirus epicenter, the nation hasn’t had more than 100 active cases at any point for almost a month. In all, it’s reported just 932 confirmed cases since the pandemic began and 27 deaths. Next door, Argentina has had over 62,000 cases. And in Brazil, to the North, infections have totaled a staggering 1.34 million.

On Monday, Uruguay became one of the first countries in the Americas to return to most classroom learning, with the final wave of schools reopening in the capital of Montevideo. It’s part of a phased restart of the economy — from construction sites to malls — that started in late April. Public events like theater performances are also set to open soon.

The reason tiny Uruguay seems to have avoided the coronavirus chaos engulfing its neighbors may have as much to do with actions from years past as now.

President Luis Lacalle Pou was faster to act than his regional peers, moving to close borders and issuing a voluntary lock-down less than a month after taking office on March 1. (Brazil and Mexico, Latin America’s powerhouses by both size and population, never did issue national lock-downs.) But Uruguayans also enjoy a robust safety net, thanks to generous spending on health care, pensions and social programs during the previous 15 years under left-wing governments.

“It’s very likely that Uruguay maintains a favorable evolution because of the consistency in how it applies measures” to contain the disease, said Giovanni Escalante, the World Health Organization’s local representative, in a telephone interview.

In 2018, Uruguay ranked No. 2 on the continent for social spending at over 17% of its gross domestic product, according to the latest data compiled by the U.N.’s Economic Commission for Latin America and the Caribbean. It also has one of the lowest poverty rates at 8.8% last year, compared with almost a third for all of Latin America.

Uruguay has one of the highest social spending rates in the region.

Social distancing in the sparsely populated nation may also play a role in keeping the virus at bay. Uruguay is roughly the size of Missouri but with 3.5 million people, its population is about half as big.

Most of the country’s more than 2,700 public primary and high schools serving almost 700,000 students are now holding classes under a gradual process that began with rural schools in late April. The use of face masks is mandatory, and classes are frequently half their pre-Covid size as students rotate between in-school and online. Parents can also opt out of sending their kids into school for now.

But even with better infrastructure and low infection rates, active cases have surged from about a dozen on June 18 to 83 as of Sunday because of an outbreak in Treinta y Tres province, which borders Brazil and where schools remain closed. Escalante, the local WHO representative, warns that Uruguay will probably see more localized outbreaks — illness among health care workers, complacency and cities along the Brazilian border are all risk factors — although it’s response to recent clusters is encouraging.

“It’s important not to declare victory,” Education Minister Pablo da Silveira told reporters in Montevideo. Backsliding in social distancing and hygiene measures by the public “could expose us to a relapse.” 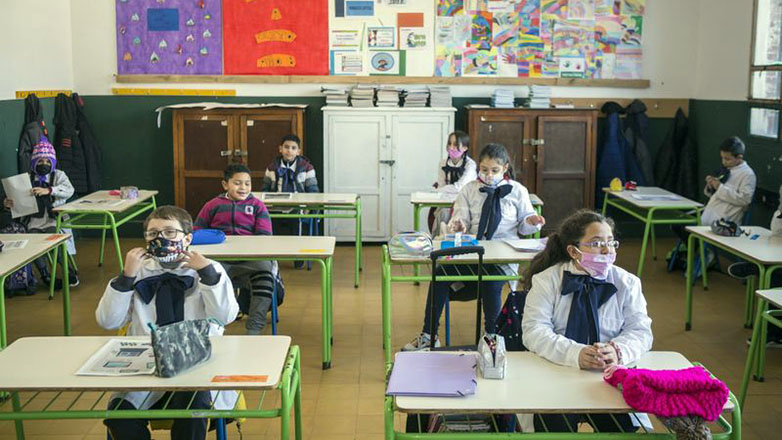 Students attend class during the first day of the final phase of the gradual process to reopen in Montevideo, on June 28.
Photographer: Ernesto Ryan/Getty Images

Written by Ken Parks for Bloomberg