With the creation of the Uruguay Audiovisual Program, international productions for Amazon Prime, HBO and Sony land in Uruguay.

The projects supported consisted of foreign productions in the form of feature films or television series that invested USD 600,000 or more in the country.

The program is implemented by the National Development Agency (ANDE), with the participation of the Ministry of Education and Culture (MEC) through the Uruguayan Film and Audiovisual Directorate (ICAU), the Ministry of Industry, Energy and Mining (MIEM) through the National Directorate of Telecommunications and Audiovisual Communication Services (DINATEL) and the investment, export and country brand promotion agency, Uruguay XXI.

From Uruguay to the world

The ease of access to a wide variety of locations, qualified personnel and state-of-the-art equipment, together with an efficient management of government permits and temporary admission, are key factors when choosing our country as a filming destination.

The zero VAT tax benefit and a cash rebate of up to 25% for international productions, together with the reliability and advantages offered by the country to foreign companies when doing business, such as the free exchange market and the absence of restrictions for the repatriation of profits, drive the growth of the Uruguayan audiovisual industry which, according to figures provided by Uruguay XXI, exports an average of USD 20 million per year and employs directly 1,500 people.

Within the framework of the Uruguay Audiovisual Program (PUA), the series “Conquest”, produced by the renowned Canadian actor Keanu Reeves, was filmed in 2019. The filming led by the national production company Salado used the emblematic Independence Square (“Plaza Independencia”) as a location and involved 1,000 jobs for Uruguayan citizens.

In 2020, the Program supported the filming of the Brazilian series “Manhãs de Setembro” in our country, with the participation of 615 Uruguayans under the production of Cimarrón Cine. The series is scheduled for release this year through the Amazon Prime streaming platform.

During 2020-2021, the PUA supported the production of “American Nights”, a U.S. series produced by La Productora Films, which included the participation of 320 Uruguayans in its filming. 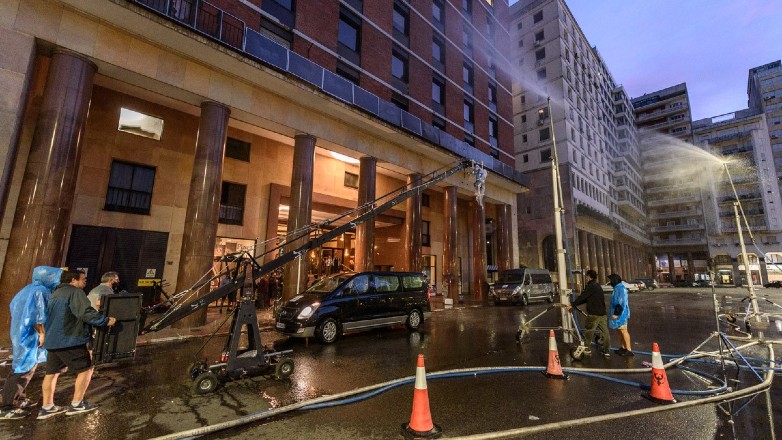 It should be noted that Uruguay was the first country to resume its activities after the Covid-19 pandemic, through the creation of a protocol aligned with the prevention measures recommended by the Ministry of Public Health of Uruguay (MSP) that guaranteed the health safety of workers in the sector at all creative stages.

Currently, Carla Ponte and Santiago López – representatives of local production company Cimarrón Cine – are working on “Sentença” (Criminal), a Brazilian series to be released on Amazon Prime. The production, which tells the story of a criminal lawyer, consists of six 45-minute episodes directed by Anahí Berneri and Marina Meliande.

Cimarrón Cine is also working on the shooting of the series “Amsterdam”, which will be shown on HBO. Both productions share the particularity of being original projects of Cimarrón, sold to the platforms that later hired its services to produce the projects in our country.