The Promise of Uruguay

Something is incredibly familiar to me about Uruguay. It reminds me of Southern California in the 1970s when I was growing up. It seems so untouched and original. People are friendly. Ambiance is chilled and natural. Beaches are pristine like the countryside. It’s unspoiled.

Of course, I have only been to Punta del Este a few times. But the vibe is a cool place to make wines and the wines are getting better every year. My only regret is that I didn’t taste more wines with only 45 wines rated in a quick tasting in February. I look forward to going back or at least tasting more wines from Uruguay in the future.

In general, less is more for winemaking here. I found many producers were simply trying too hard. They either picked too late, or they over-extracted tannins during the winemaking, or they used too much new wood in aging and left their wines in barrel too long. Those who tried to make more refined and straightforward wines received better ratings.

“The possibility for making quality wine is endless,” said Hans Vinding-Diers, who is best known for making plush wines in Argentina, particularly at Noemia in Patagonia, but who also consults in Uruguay at Bodega Oceanica Jose Ignacio. “I am really happy with the balance of the wines, particularly the whites.”

The winery he consults for is in the region of Maldonado where all of my top rated wines from this report came from. It reminds me of parts of the Central Coast of California like Santa Barbara or San Luis Obispo county but it’s less hot and dry. The vines are planted on rolling hills that are used for other agriculture plantings and livestock. 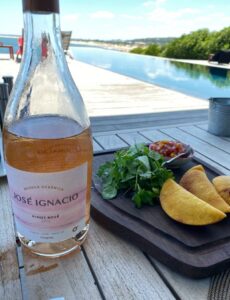 This rosé from Jose Ignacio offered sliced-strawberry and lemon aromas and scored 91 points. 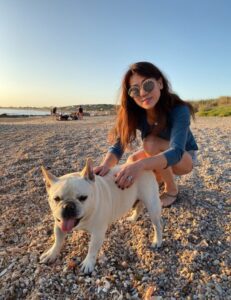 Marie Kim-Suckling makes friends with one of the locals. 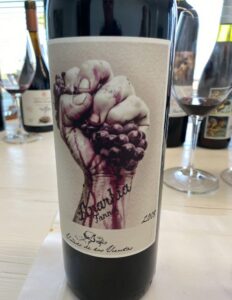 James described this tannat-based wine as “delicious” and with a “juicy finish”.

This is the area is where the Argentina oil magnate Alejandro Bulgheroni created a phenomenal wine estate, Garzon. The massive property has more than 200 hectares of vineyards planted in the sandy granitic soils. It also has a beautiful golf course and visitors center complete with a restaurant by arguably the world’s greatest open-fire chef and master of Argentine cuisine Francis Mallmann. Bulgheroni’s dream is to make Garzon Latin America’s Napa Reserve, a private club allowing wealthy members to make their own wines with all the amenities.

The fact is that Garzon has a way to get there and happily the wines from Garzon are some of the best value in interesting wines in South America instead of overpriced Napa wines. Garzon’s top wine such as the blended Balasto, which is mostly tannat with cabernet franc, marselan and merlot, is indeed world class with intensity, structure and balance. But the entry level wines are really impressive particularly the whites from albarino and reds from marselan. They have a purity and unadulterated character that really makes you want to drink them.

‘There is so much to do here in Uruguay,” admitted Christian Wylie, the manager of Garzon during a visit this February. He pointed out that the country has about 8,000 hectares of vineyards but only 50 percent are fine wine grapes. The other half is planted to muscatel.

Wylie and others are still convinced that Uruguay can make its name on tannat, but I find so many of the wines overdone with jammy fruit and a weird balance of tannins and acidity. I find marselan or even cabernet franc potentially more interesting. But it’s early days and everything seems possible in Uruguay.

Perhaps that’s why Uruguay reminds me of my childhood in Southern California. I have fond memories of how everything was possible then, particularly with the beach nearby and all sorts of natural beauty, not to mention the wine that was free flowing at my father’s house.